Rode NT1A vs NT2A: Which is the Best Vocal Mic?

In this post let us discuss Rode NT1A vs NT2A and decide which one is your best bet. 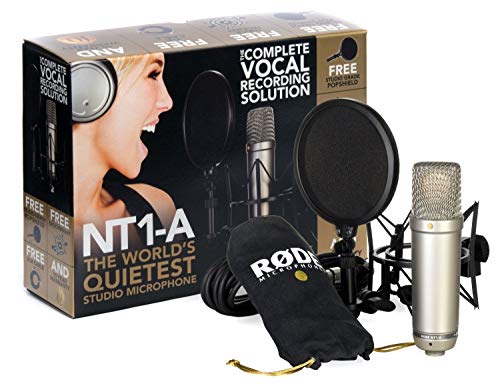 Just by looking at both mics, it feels like NT2A is an upgrade on NT1A. NT2A has a lot more going on in its body, with more switches and options it offers. However, as we all know, more activity does not necessarily indicate progress.

Are the additional options on the NT2A really necessary?

Is it worth spending more money on, or should you just stick with the NT1A? You will surely have answers to these questions in this article.

The NT1A has a solid build; it’s all metal from the shaft up to the grille. It’s shaped like most studio condensers – a vertically placed shaft with the address end at the top. It’s quite similar to Rode NT1. If you want to know more about Rode NT1A vs NT1, make sure you read this post.

NT2A looks and feels very much like NT1A, with a similar satin nickel finish. One obvious difference is the metal switches on the NT2A. They are quite solid and you need more than a gentle nudge to flip them.

This is good because you can be sure that whatever preferred settings you have done on the mic will stay as it is, and an accidental bump will not cause any switches to flip. Also, NT2A has more protection for mesh grille.

The mesh grille on the NT2A is not one piece, rather it’s two halves fixed on either end, with a metal divider between. This makes the mesh grille more susceptible to removal. However, it will take years of use and numerous falls for this to happen.

Both mics have a similar frequency range; 20Hz to 20000Hz. However, that alone does not tell the full story.

The NT1A’s frequency response is not really flat, but compared to some other mics of its class, it’s quite close.

There are bumps and cuts here and there, but in the end, they all end up close to the 0db line.

The same applies to NT2A, in all its polar patterns.

NT1A has a slight bump in the 100Hz to 200Hz region. It’s followed by a slight dip, then a presence bump that begins to rise at 3kHz till around 15kHz.

This presence lift has a great effect on the character of this mic. It is quite bright and open. It works best when your source has quite high frequencies like an acoustic guitar’s highest notes.

Even though they naturally sound lower in volume than other parts, they shine through when recorded with the NT1A.

However, if the artist’s voice or instrument already has a lot of brightness, it may come off a little harsh on this mic, especially at high gain.

The low-frequency bump also shows in the mic’s character, giving some dark warmth to vocals. If the artist’s voice is naturally deep, you should keep a close watch on those parts.

NT2A also has a presence boost that starts off in the high mids, but its effect is not as intense as in the Rode NT1A. It maintains clarity and brightness, but can still take bright sources without any harshness.

The presence bump-starts much later in the Omni mode, with the rise beginning at around 7kHz. Overall, NT2A sounds more natural than NT1A, and it shows in both the frequency charts and practical hearing.

The curse of natural-sounding gear is that they make you work harder. When a mic captures your sound and the playback is very natural, you may have some work to do in mixing.

But with the kind of presence boost that the NT1A has, your vocals will shine without so much work. NT1000 also has these similarities when compared with NT1A. With NT1A in this NT2A will give you something closer to what you recorded.

These two mics have incredibly low self-noise, which makes them able to record the very quiet sounds, provided external noise doesn’t drown them out.

NT1A is a cardioid microphone, which means that it only captures sound sources placed right in front of it. This makes it quite useful for recording vocals in the studio. It’s also good for podcasts, especially when you have to deal with background noise.

NT2A gives you three options on the polar pattern. You can use the cardioid, figure 8 or omnidirectional pattern. Omni mode enables the mic to capture sound from all angles. This can be useful for recording round table podcasts.

Figure-8 is basically two cardioid capsules on either side of the mic, so you can use it to record a duet or a show with both speakers positioned across each other.

NT2A has a number of additional options in the form of switches. There’s the three-way pad that allows you to choose a gain reduction of 10db or 5db.

You can also choose to use no reduction at all. That’s not all, you also have a high pass filter that cuts out some of the low-frequency rumbles for you. You can choose the 80Hz cut, 40Hz cut, or no cut at all.

NT1A, on the other hand, does not have any of these switches. Of course, the NT2A’s many options come at a price.

Both mics use XLR connectivity, so you can’t connect them straight to your computer. You need an audio interface to work with. Also the interface you use with them must be equipped to provide at least 48V phantom power to drive the mics.

Of course, the many options you have with the NT2A makes it more versatile, it’s not the fact that I will pick it over the NT1A. This is mostly because those options come at a price, so I have to consider if that difference is really worth it.

For studio vocal recordings, NT1A really does the job. Although more care should be taken when recording bright vocals. If you know your way around your equalizer, you can work on the higher frequencies in the input chain on your DAW.

Also, for podcasting, voice-overs, and other speaking engagements, the NT1A is also good enough if it’s just you speaking.

All in all, I’ll pick the NT1A. Even though NT2A provides many options, you can achieve similar results with NT1A if you have enough expertise. If you don’t, the NT2A is here for you.